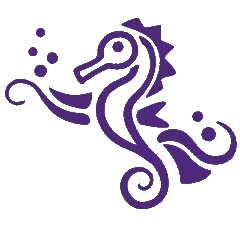 Abuse, trauma, the enablers and how to address it…

We’ve had the #metoo movement, so perhaps it’s easier to talk about abuse now, but I am still surprised especially by how many women I hear denying its existence. ‘But, they seem so nice …’ This shouldn’t be the time to silence one another, but to allow each other to speak our truth. Our intentions are key. There is no good or bad person, no right or wrong way, but an intention to be authentic, and to not live behind a lie.

I’ve been motivated to write this blog because of recent experiences in my life that have led to me to feel that I am back in the 1970s, prejudices and all. 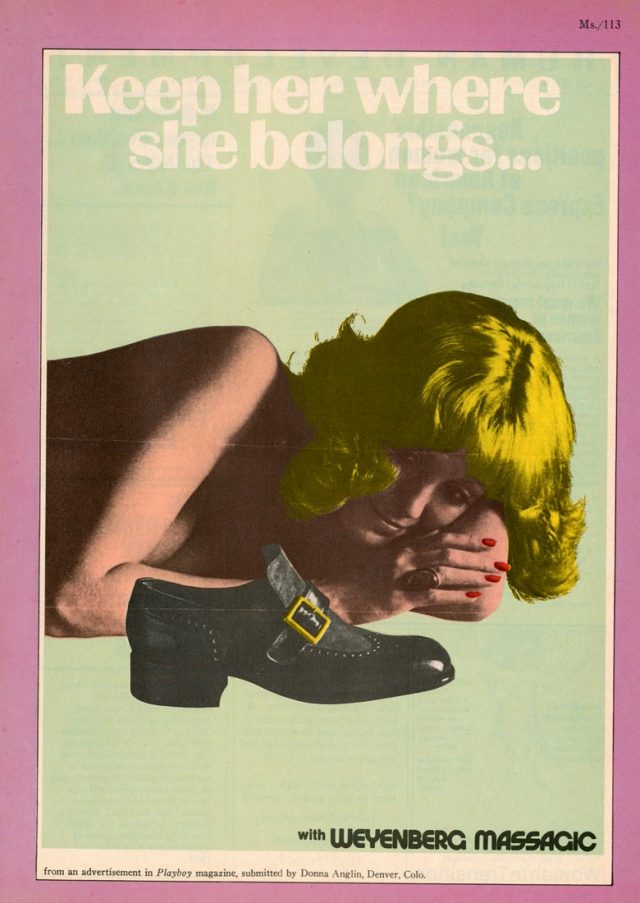 Statistics…
So, whilst we think we are moving into the twenty first century, let’s stop and have a look around us. In Brighton and Hove alone last year, there was an increase of 74% in the use of Rise, a Sussex-based charity that supports people affected by domestic abuse and violence. Between the years 2016 and 2017, 1994 clients registered with Rise. 211 of these were assessed as high-risk cases and referred to MARAC, a Multi-Agency Risk Assessment Conference that discusses these high-risk cases and offers professional support and advice. Approximately 1,000 of these Rise clients had children. Nearly 600 had a disability, and over 160 were under 18 years of age. The majority of the abuse, that is 725 cases, was committed by the ex-partner, 221 by the current spouse and 240 by the current partner. Figure 2 gives the exact statistics of the abuse perpetrators listed on the Rise website. 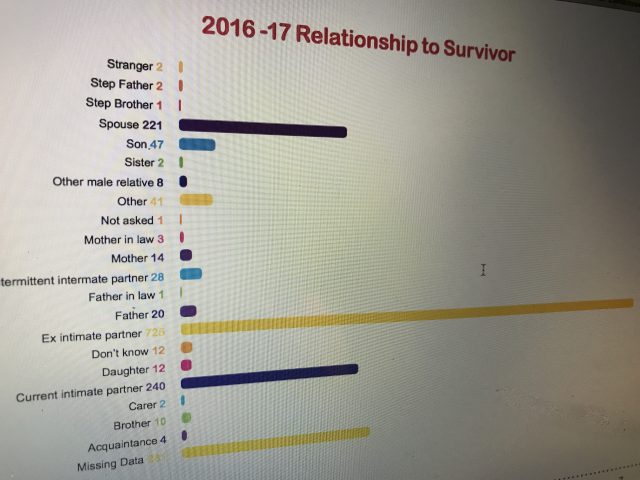 Figure 2. Who Commits Abuse in Brighton and Hove? 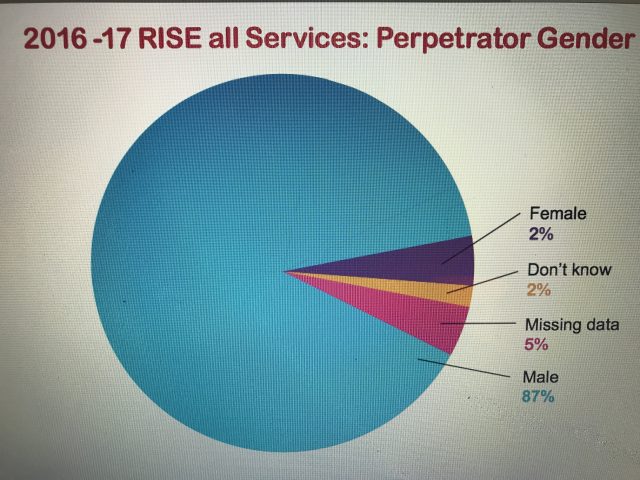 Figure 3. The Percentage of Abusers.

Abuse is on the increase, yet people deny its existence. They enable it. Why is that? Harvey Weinstein wouldn’t have had such ongoing success if he had been called out. I am not talking about the abuse victims, but those around the abusers. The enablers. It is this that also needs addressing. People don’t want to acknowledge that someone they love has committed a heinous act. It’s easier to live in denial. As Sarah Silverman said of Louis CK, her close friend who was called out in the #metoo movement of abuse, ‘can you love someone who did bad things?’. I imagine the answer is yes; we want to find forgiveness, but that doesn’t mean denial, excusing or minimising the abuse.

How does this relate to yoga?
As a yoga teacher, I am aware of mental and emotional wellbeing. But, yoga needs to be going to the disadvantaged of our society, to those on the edge. The usual demographic for yoga, according to Tina Cartwright’s first UK yoga survey, is white, female, middle class and educated. And, that pretty much sums up most yoga classes I know in Brighton, including the teachers. Does this need to be changed? I personally think yoga is important for recalibrating our nervous systems so that we can move back into health, and that means for everyone. But, it only seems available to a few. And, that doesn’t seem right. The problem is that there just isn’t the funding to reach local services, such as Rise and Veritas Justice, a service that informs and supports victims of stalking here in Brighton and Hove.

What is the answer?
• Fundraising?
The Brighton Yoga Foundation is doing some great work here funding our local services for homelessness etc. We need more.
• Education?
Educate and inform children and have more children’s yoga in schools.
• Government funding?
Lobby the government for yoga and wellbeing for all the services dedicated to child abuse, domestic abuse, addiction, homelessness and so on.

What seems to be missing from all of this, however, is the support for the abusers. The first port of call has to be the victims, but if the abusers don’t change, how will we move on as a society? What about obligatory education and embodied therapy services for the perpetrators to help move them out of the cycle of abuse? 9 out of 10 abusers will have witnessed and/or experienced abuse in their lives. You cannot just think your way out of abuse, your body/mind, including your central nervous system, also needs to learn.

What abuse victims and abusers have in common is trauma. We don’t often think of it that way, but the abuser is no doubt also traumatised either from early childhood trauma or ongoing trauma throughout their lives. It’s not an excuse, at all. It’s trying to understand the situation to address the issues.

A little on what trauma is…
So how can we understand trauma in an easy digestible manner? Following Bessel Van der Kolk, if I were being attacked, the visual sight of the attacker, the sounds and movements they were making, and the smells they emitted would all be logged through my eyes, ears, skin and nose. This information travels to a part of my brain called the thalamus, which collates all this information into a whole movie picture. This holistic moving picture is then sent to the amygdala and the frontal lobes. Because the route to the amygdala is faster than the frontal lobes, it triggers a response before we are consciously aware (see Figure 4). The amygdala alerts us to danger. It gets the hippocampus involved by accessing past experience: was this dangerous before? 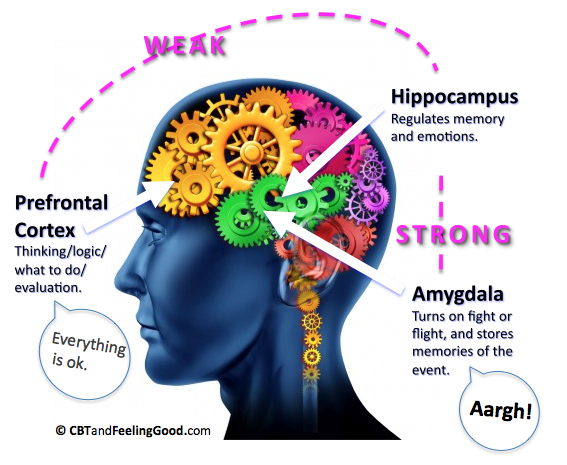 Because there is a threat in our hypothetical example, the attacker, the amygdala communicates with the hypothalamus, brain stem and nervous system to recruit the stress hormone system by communicating with the pituitary gland, which releases adrenaline, signalling to the adrenals to release cortisol into the body. This increases our heart rate, blood pressure and rate of breathing and tenses our muscles, preparing us to fight or flight. Once the danger has passed, the body recovers and returns to normal. This is the normal response to danger. The trouble starts when we are stuck in this cycle (see Figure 5).

Figure 5. Being Stuck in the Trauma Cycle, Secreting Adrenaline and Exploding or Shutting Down

What happens if someone has been unable to escape the perpetrator, has been held down or threatened into staying? If we are prevented from fighting or escaping, the body keeps secreting adrenaline, but the cortisol remains low, meaning that it cannot tell the system to turn off the stress response. For both victims and perpetrators, they can explode or shut down in response to the most innocuous situation, that is they are stuck in ‘on’ or ‘off’ mode. The medial prefrontal cortex (MPFC), for Bessel Van der Kolk, enables people to observe what is happening so that they can restore the balance of the amygdala if it has responded to a false alarm. For instance, if you hear a crash, your body prepares you for the possibility that someone has broken in, but then you find out the cat has knocked something over. The MPFC can relay a message to our amygdala to calm down. It enables us to inhibit and modulate our pre-programmed emotional brain, so it is crucial for our survival (see Figure 6). When it breaks down as a result of trauma, we cannot control our emotions, impulses or stress. Even if the rational brain is in denial about this, as Bessel Van der Kolk says, the body keeps the score. 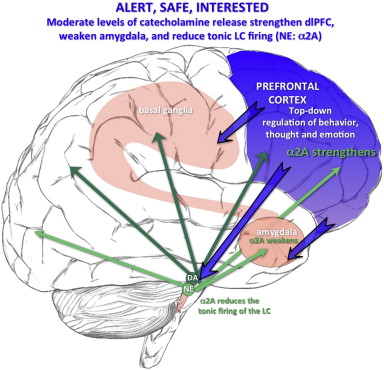 How to address trauma in the body…
By using the MPFC, we can learn to regulate our emotional brain. This is called top-down regulation, as shown in Figure 6. You can achieve this via meditation and yoga, using the observing part of ourselves to notice our sensations (interoception): am I feeling hot, cold, tingly or heavy? This also works by noticing our position in space (proprioception): where is my right shoulder blade, back ribs on the lower left-hand side? We can do this whilst we are in the yoga. Trauma can also be addressed via bottom-up regulation, recalibrating the nervous system, which originates in the brain stem. We can do this through breath awareness and moving in an intelligent and fluid way. I call this getting into the flow state. This can also happen when we get into the flowing and fluid part of our yoga practice.

The process of regulation is step-by-step, allowing people to learn to observe themselves and tolerate a little stress without being triggered. It is vital for people with trauma.

A little about the brain…
For Bessel Van der Kolk, understanding the relationship between the different parts of the brain is vital for people with trauma. 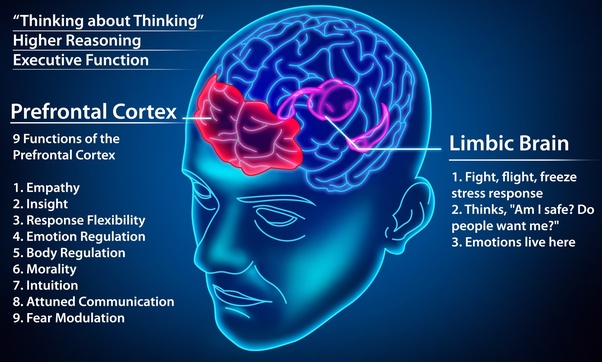 Figure 7. The Difference Between the Limbic Brain and Prefrontal Cortex

A final note…
If you are a yoga teacher, you don’t know who you have in your class; if someone has suffered repeated abuse and/or traumatic events, it is likely that they could be disassociated. That is to say, they are not in their bodies, so they may find it difficult to know what feels okay and what doesn’t. Always ask permission. Let the students be the agents of their own action. Give students choices and allow them to opt out. Get them to check in as to whether they want to be adjusted on that very day; do it anonymously.

At the end of the day, our bodies are our bodies. Let’s keep it that way.